In my own recent session I have received a brand new information from my Higher Self on something that happened to me four years ago in regards to some portals that I saw. This was something that made me wonder ever since and constantly thinking about and, in a way, it’s been tormenting my mind for not being able to understand it and to make sense of it.
Because I could not find anything accurate for what I saw, I drew myself these two drawings that reproduce really close my perception of those two portals.

So here is what’s happened .
Back in 2013 I was still in Braila, my beautiful hometown on the Danube, in Romania, when, in two different sessions that I facilitated two weeks apart, I have seen two different portals..
One was colorful and slowly rotating counter clockwise. Its diameter was around six feet and it looked like a various colored brushes strokes on my wall and they were constantly and slowly rotating. It was such a beautiful image!!! 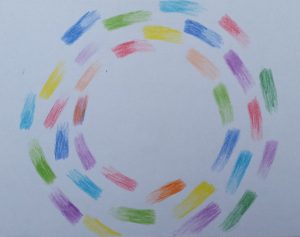 The second one was colorless, only gray hues and it was still. The size was the same. 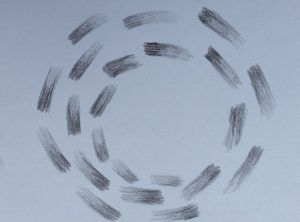 They both opened up on the same wall, behind the client’s head. They both remained on my wall for about a half an hour. I just observed them. I haven’t asked about them in the respective sessions, I only kept looking at them. I was very surprised myself and I didn’t want to scare my clients, for they have not mentioned it so I figured that I was the only one seeing them. At first, I even thought that I was imagining things, but when I turned my eyes from the portal to my client, and then back to the portal, I saw that it was still there. It didn’t go away, so I had to believe it. When I saw the gray one, on the second occasion, it already became natural for me. 🙂
As I previously said, since then I kept thinking of them, and for the last four years I was trying to make sense of it. Why were they shown to me and what were they, what was their purpose or significance?

As the time passed, I have made an attempt to find out about these two portals. It had to be in one of my own session because I wanted to make sure that this is something that people can know about, and that is harmless. This session took place also in Romania, almost two years ago. I had to wait all this time for there was no one there to give me a session until that moment.

The only info that I’ve got then was that through these portal are coming information, energies, beings and that I was made aware that they exist, that’s all. I was also shown a tunnel that opened up above me and non related images started to come down to me, like in that video game, Tetris, where puzzle pieces came down into their places. I could not make sense of what was coming down until I went into the past life I was shown in that session. At that time, I have not figured that this was my own portal that was right there, for me, bringing me all sorts of energies and images.

Now, in another session that I have had in September 2017 I have finally received an answer that I was waiting for such a long time and that I could make sense of it and below it is it’s exact transcript.

“It is an individual journey that each client will take. It depends on what they choose. It’s like the portal opens up with QHHT. The portal is there. The clients don’t see it. It depends on them. QHHT has it’s own portal.
The portal that was moving and colorful was for someone that was willing to( allow), more than the other person with the still, colorless portal. It’s their choice.
This is one way of searching. Could be other methods. QHHT opens a portal.
They (clients) not always go through portals. Things come through portals, or ideas.
They have to be receptive. The bigger the openness, the bigger the portal. It is not up to us, it is up to our clients.”

Conclusively, QHHT that was developed by Dolores Cannon opens up a portal for each client. It depends on the client if they want to connect to it or not, so this means that the rotating, colorful one was for an allowing and open to receive client, and the still, colorless one was there for the client, but the client hasn’t allowed it or was not ready yet and was not open at that moment to find out what could have found in that particular session.
There is no conversation going on between my client and their Higher Self on this matter: “Do you want your portal open? Yes, maybe! No, thank you! “ No, it is nothing like that. They will not be aware of it if they are not ready to see such thing.

My understanding is that it happens in every session and it is not about my sessions, but all QHHT session around the world.

Then I saw my own portal that was open just behind my head. The image I was shown was that these portals are going down, in the beginning, and they are a bit like tunnels of colors. Mine was intense purple.

Spread the love by sharing it
2017-12-07
Previous Post: Group regression versus individual session
Next Post: How many QHHT sessions one needs?